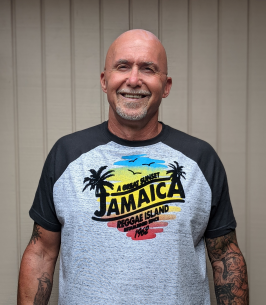 Charles Paul Hale, Jr.
September 15, 1966 - August 21, 2021
Charles “Paul” Hale, Jr., resident of Wylie, TX and native of McMinnville, TN passed away unexpectedly on August 21, 2021 in Rowlett, TX. Paul was born on September 15, 1966 in McMinnville, Tennessee to Chuck and Judy Hale. He was the only boy in a family of 4 children. He grew up in McMinnville, though he would spend lots of time in other parts of the state. Paul spent nearly all of his life in Tennessee until, at 54 years old, he made the decision to move to Texas. Paul came to live with his daughter, son-in-law and granddaughter in Wylie, TX in January 2021 and spent the last 7 months of his life working hard, building a reputation and solid future for himself, and enjoying being a dad and hands-on Papa.
Paul enjoyed most sports, although UFC, football and basketball were his favorites. He also loved hunting, fishing, camping and most other outdoor activities. Paul was passionate about training dogs, and was learning about HVAC work at the time of his passing. Paul was also actively involved with the neighborhood life group and was a frequent attendee at Trinity Fellowship Church in Richardson, TX where his family are members.
Paul was a devoted Papa to his granddaughter and beloved by everyone who met him. His friendly demeanor, over-the-top storytelling skills and contagious laugh drew in even the wariest of strangers. He lived every day to the fullest and never missed an opportunity to have fun and meet someone new.
Paul was preceded in death by his father Charles Paul Hale, Sr., mother Judy Ann Turner, sister Patricia Carol Brady, and niece Samantha Renee Cox Blanton. Paul is survived by step-father Clifford Turner of McMinnville, TN; daughter Miranda Mathis and husband Keaton, of Wylie, TX; son CJ Hale of Knoxville, TN; two sisters - Paulette and husband Sidney Martin of Rock Island, TN, and LeeAnn Cox and partner Mitch Hughes of McMinnville, TN. Paul had one granddaughter, Theya Mathis, also of Wylie, TX. Paul is also survived by many beloved cousins, nieces, nephews and friends.
A memorial service will be held at Gardens of Memory in McMinnville, Tennessee on Saturday, September 4 at 11:00 am. The family will receive friends from 10 to 11am. In lieu of flowers, the family asks that you consider making a donation to Men of Valor (TN) or Bridges to Life (TX), both of which support ex-offenders coming out of prison and re-entering society.